Machine learning is a field with intense computational requirements and its learning experience greatly depends on the choice of your GPU made. Without a GPU this might take long to see that the chosen parameters were off and the model diverged. However. with a good, solid GPU, one can quickly iterate over designs and parameters of deep networks, and run experiments in days instead of months, hours instead of days, minutes instead of hours. Therefore, making the right choice is critical. The most important feature of GPU for machine learning is its speed as this allows for rapid gain in practical experience which is key to building the expertise with which you will be able to apply deep learning to new problems. Without this rapid feedback, it just takes too much time to learn from one’s mistakes and it can be discouraging and frustrating to go on with it. With GPUs, tasks are completed quickly. The most important reason for picking a powerful graphics processor is saving time while prototyping models. If the networks train faster the feedback time will be shorter. Thus, it would be easier for brain to connect the dots between the assumptions for the model and the actual results.

The TITAN X Pascal is an enthusiast-class graphics card by NVIDIA. Built on the 16 nm process, and based on the GP102 graphics processor, the card supports DirectX 12.0 and has all 3840 shaders enabled. It operates at a frequency of 1417 MHz, which can be boosted up to 1531 MHz, making it more suitable for machine learning.
Titan X Pascal is best for someone who wants to compete (and win) Kaggle DL contests. Performance of smaller variants has been improved because of its Pascal architecture.

The Tesla V100 PCIe 16 GB is a professional graphics card by NVIDIA, launched in June 2017. Built on the 12 nm process, and based on the GV100 graphics processor, the card supports DirectX 12.0. The Nvidia Tesla V100 GPUs have been making their way into the Artificial Intelligence and market learning markets. Tesla V100 isn’t your typical GPU. Each of these V100 GPUs comes with 5120 CUDA Cores, 640 Tensor Cores and 16GB HBM2. Its cores are specifically designed for machine learning, offering much better performance with regards to all operations. Apart from machine learning, this graphics card is suitable for Artificial Intelligence and many other research institutions.

The Nvidia GeForce RTX 2080 Ti is an especially powerful GPU that work really well for machine learning, particularly because of the speed it offers. It is one of the best graphics card for pushing the boundaries of computer graphics forward with ray tracing and AI-driven Tensor cores. It also delivers some impressive specification with 11GB of GDDR6 VRAM, 4,352 CUDA cores and a boost clock of 1,635MHz. This GPU also features two additional types of cores. The RTX 2080’s Ti’s 68 RT Cores power ray tracing, which allows this graphics card to render much more complex, real-time lighting scenarios and natural shadows. 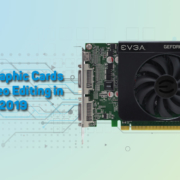 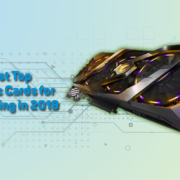